Candidates remarked that the questions, all drawn from parents’ and providers’ own lived experience, taught them new issues about barriers that families of young children face. The forum was sponsored by a coalition of partners including First Steps Kent, Great Start Collaborative of Kent County, MomsBloom, Think Babies Michigan, and Michigan’s Children. 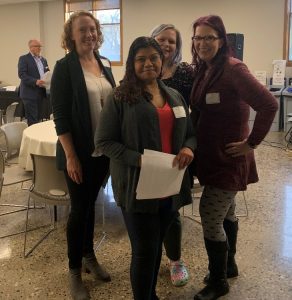 Parents shared personal stories about the policy barriers preventing families from making the best child care decisions for themselves. One parent asked candidates to address the requirement that certain families must open a child support case in order to receive a child care subsidy, even when that upsets a functional informal co-parenting arrangement. Another attendee, a K-12 teacher, detailed how the lack of paid time off made it difficult to care for their grandchild without being personally penalized, even though they were that child’s best caregiving option.

Other questions spoke to the history of underinvestment in child care, afterschool programs, and early developmental services that has resulted in an industry where child care workers are paid less than animal care workers. Candidates admitted that the free market does not work for the child care industry, and that there is a public role. Candidates also supported finding more opportunities for children to learn outside of the classroom.

Candidates recognized that despite recent progress, there is much more to be done in Michigan to support families and children, and committed to collaborate with the group of parents and providers who attended, if they win the election.