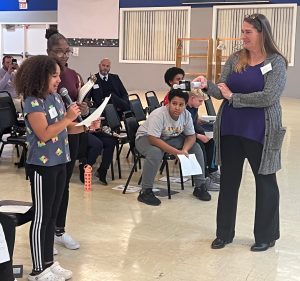 Bay City – Young people with the Boys and Girls Club of the Great Lakes Bay Region’s Bay City afterschool program voiced a spectrum of concerns from education to the health and safety of their community at a candidate forum featuring two state Legislature races on.

Sponsored by the Boys and Girls Club and Michigan’s Children, the event on October 18, 2022 offered a striking picture of young people lifting up their voices and raising concerns. The youth had dedicated time to developing their ideas and questions over the past few weeks. One of their peers, Zaidreyhana Jackson, a candidate for the Bay City 2022 Youth of the Year, moderated the question-and-answer portion of the forum. 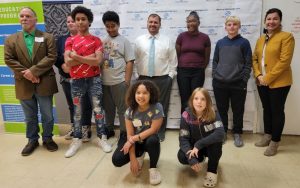 Questions highlighted youth’s concerns about their education, community well-being, and social concerns over racism. Students asked candidates whether they supported a year-round school calendar with multiple smaller breaks instead of one large summer vacation (known as a “balanced” calendar), and how they would improve school lunches. They demonstrated a keen perception of their community’s health and safety, asking about pollution and water management, gun violence, and safety and lifeguards at beaches. Youth also reflected issues that have dominated conversations in many communities, including responses to inflation and police relations.

Candidates committed to spending time together with the Bay City youth, if they are elected, and vowed to follow up the forum conversation by championing issues that they can impact.